The Presidium of the Lithuanian Academy of Sciences has awarded its Prizes 2017. Among the laureates are the FTMC researchers Dr. Arūnas Jagminas ir Dr. Aldona Balčiūnaitė.

The commemorative Juozas Matulis Prize (in chemistry) was awarded to the FTMC researcher Dr. A. Jagminas for a series of works “Investigations of the synthesis, modification, characterization and application of nanostructures (2000-2017)“.

Also Dr. A. Balčiūnaitė was announced one of the winners of the annual “Young scientists‘ and doctoral students‘ competition“ for her work “New materials for alkaline fuel elements: synthesis, characterization and properties”.

Our sincere congratulations to the awardees! 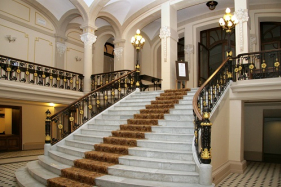