Lithuanian scientists, world-famous researchers in the field and young people gathered at the 17th International Conference "APROPOS 17" - "Advanced Properties and Processes in Optoelectronic Materials and Systems" (September 30 - October 1, 2020) in Vilnius, Center for Physical Sciences and Technology (FTMC).
The APROPOS 17 conference (the second under new name) continues the series of symposia held in Vilnius since 1971 with the initial title “Plasma and instabilities in semiconductors”, later “Ultrafast Phenomena in Semiconductors” (UFPS). It was an international event on plasma and semiconductor physics initiated by the then Institute of Semiconductor Physics, bringing together scientists from all over the world working in these fields. Conferences were held in Vilnius every three years.
After the renewal of the APROPOS conference, it was considered to change the place every time - to hold one year in Lithuania, the other in Germany, and so on. t. However, the grandiose working in the field of terahertz and optoelectronics decided to maintain the long-standing tradition of organizing APROPOS in Vilnius: after all, it is the FTMC staff who are the leaders in this field. The second argument is that the FTMC employs a large number of young people, and the third is the center's close links with business.
The conference aims to reveal and share of new ideas in technology, research and application of new advanced optoelectronic materials, to discover new trends in optoelectronics research and to discuss processes and fascinating phenomena arising when optics meets electronics. Special emphasis is attributed to applications of ultrafast methods for advanced materials.
According to the conference organizer, FTMC dr. Renata Butkutė, the participants bring here the latest, as yet unpublished research results, share ideas, establish useful contacts and cooperate in international projects.
Director of the Center for Physical Sciences and Technology (FTMC) academician Gintaras Valušis opened "APROPOS 17" and welcomed the participants of the event:
"It is gratifying that the “APROPOS” community is growing. These meetings are a great opportunity to discuss, present international science and technology development projects, launch new ones. The pandemic has strongly adjusted the plans for this conference: many speakers discussions will take place online. However, I ‘m glad that we are meeting again and can listen to the world's most famous optoelectronics scientists. I hope that the next “APROPOS” conference will take place soon and we will enjoy direct communication again. Thank you for your time, knowledge and kindness in sharing your experience. " - said FTMC director G. Valušis.

An important part of the “APROPOS 17” is a satellite-based seminar-workshop of Lithuanian and Polish scientists. This satellite event was solemnly announced by the Ambassador Extraordinary and Plenipotentiary of the Republic of Poland to the Republic of Lithuania Mrs. Urszula Doroszewska, on Thursday morning.
"I am honored to open another Lithuanian-Polish physics and technology workshop. (...) I am glad that, despite the difficulties, you managed to organize the "APROPOS 17" conference - thanks to the Center for Physical Sciences and Technology - for the Poland and Lithuania workshops. (...) I am glad that this year you managed to implement another DAINA 2 programme of National Science Center (NCN) and the Research Council of Lithuania (LMT), in which Polish and Lithuanian researchers can join forces in joint scientific activities. This programme was welcomed with great interest and I am convinced that our cooperation will be mutually beneficial and strengthen Polish-Lithuanian researcher’s partnership.” -said Ambassador Urszula Doroszewska.
FTMC director prof. Gintaras Valušis thanked the Polish Ambassador for the congratulations and was pleased with the continuation of the warm relations between Poland and Lithuania and the synergy between the two countries in developing science and innovation projects.
"We highly appreciate and thank You for the beautiful cooperation of scientists from our countries in the fields of science and technology - both in the current and new Lithuanian-Polish scientific projects. We have a long history together, inspired by the Union of Lublin and the May 3 Constitution, the first Constitution in Europe, which promotes not only the memory of a common history, but also common values, close neighborly relations and their continuity in the science and technology dimension.” - said the FTMC director.
In the “APROPOS 17” Polish-Lithuanian workshop there participated famous scientists: prof. W. Pacuski, prof. A. Lisauskas and others. Currently, the FTMC is implementing at least five Lithuanian-Polish bilateral projects related not only to scientific progress, but also to youth mobility and the sharing of competencies. One of them - the exclusive three-year bilateral project "Terahertz frequency plasma wave instabilities in GaN / AlGaN nanowires" (TERAGANWIRE), managed by dr. I. Kašalynas from FTMC and dr. M. Sakowicz from Polish Academy of Sciences, Institute of High Pressure Physics,  launched in 2019 at the invitation of the Research Council of Lithuania and the Polish National Science Center (NCN) programme "Daina".
The cooperation network of researchers from Montpellier, Warsaw, Vilnius and Nizhny Novgorod "Semiconductor sources and detectors of THz frequencies" has been operating since 2004, and the CENTERA project is taking place in Warsaw.
FTMC and Polish researchers are even more active in developing new projects this year, planning research project initiatives with the Polish Academy of Sciences, Warsaw University of Technology (WUT), Warsaw University, Wroclaw Technical University, Gdańsk University of Technology, and other educational and scientific institutions.

Mobile phone - an example of optoelectronics

At the international conference “APROPOS 17”, researchers are working on several different topics. The first vas “Semiconductor nanodevices and advanced photonic systems”. According to FTMC dr. R. Butkutė the global trend is the size decrease of devices and objects, physicists benefit from it: by reducing the object, its properties become very pronounced.
"For example, by reducing the object in a light bulb that is responsible for light, we can make a laser with very narrow and very intense radiation," – said dr. R. Butkutė, adding that nanotechnology can be used in many fields: sensors, biology, medicine, the environment and the environment.
The engineering, characterization, device development of terahertz materials were discussed by" “APROPOS 17” participants in the discussion group “Ultrafast and terahertz phenomena”, and the third one will focus on nano and biophotonics.
“Organic sensors together with physical nanostructures, could facilitate the sensing of biological objects. Solid-state LEDs are not very favorable, but organic ones can also be flexible - in the form of a film, transparent, etc.” - said dr. FTMC R. Butkutė, adding that the advantage is also the relatively low price of organic LEDs.
According to the researcher, terahertz sensors can be used for non-invasive measurement of blood glucose. With their help, at a distance, it may soon be possible to detect very early signs of arthritis in the joints - when uric acid crystals are still forming. This would significantly improve the preventive diagnosis and treatment of gout.
The main repost of the ”APROPOS 17” was prepared by the head of the FTMC Optoelectronic Systems Characterization Laboratory, senior researcher dr. Linas Minkevičius. He says that we all use optoelectronics, but not everyone knows what it is: “Usually, it is optics plus electronics. The most widely used products in the application of optoelectronics in practice are mobile phones, various sensors”.
FTMC dr. R. Butkutė emphasized, that Lithuanian scientists are the world famous for their works in the field of terahertz. This is one of the topics, that is deeply analyzed in the FTMC: the scientific area where the FTMC researchers are actively developing new technologies, devices and their systems, as well as working on international projects.
"Terahertz devices or systems are the technology of the future. For example, with the help of ultrasound you can see human organs, X-rays – help to see bones, but terahertz waves, which are completely harmless to human, would allow imaging everything in millimeter resolution. Using terahertz devices, we can remotely detect defects in chips, fractures, objects hidden in pockets or boxes.” - commented FTMC dr. L. Minkevičius. According to him, terahertz scanners already are used by some airports to identify explosives or other potentially dangerous objects that cannot be detected by metal detectors.
In FTMC there is a group of scientists, who develop various emitters: laser, optically accumulated, electronic frequency multipliers. “To develop detectors and emitters, we grow innovative materials with different parameters that are not usually found in nature. The other component is the optics, which is needed to control the emitter's radiation. In short, terahertz imaging systems require three main components: an emitter, a detector, and optics.” - popularly explained dr. L. Minkevičius. Scientists are working to develop compact and lightweight lenses for the terahertz frequency range. The mirrors or lenses currently used in stationary systems are not compact and due to their size, the systems become more massive. One of the goals of FTMC scientists is to create flat, thin lenses (nanolenses) that have the same or even better properties than standard ones.
Organizers of the event emphasized that the two-day “APROPOS 17” conference is attractive precisely because it brings together specialists from different fields working on similar topics. On the Conference there were invited reports read by the members of the FTMC’s International Advisory Board members, who work in the field of terahertz. There participated other prominent researchers, young scientists and doctoral students.
A special session for the development, research and application of terahertz devices was initiated by FTMC prof. Arūnas Krotkus and famous foreign colleagues: prof. Carlito S. Ponseca, Jr. (Linköping University, Sweden), prof. Kaibo Zheng (Danmarks Tekniske Universitet, Denmark), dr. Sophie E.Canton (ELI-ALPS, Extreme Light Infrastructure, Hungary, DESY German Electron Synchrotron, Germany). The rapporteurs reviewed the results of the latest research and discussed the main guidelines of the project concept for obtaining EU funding. High-tech companies, which were presented at the event, have shown their achievement of technologies and scientists shared their knowledge.
“APROPOS 17” traditionally invited researchers from other Lithuanian research institutions and universities:
“At VU Faculty of Physics, Institute of Photonics and Nanotechnology, we have groups of world-renowned researchers, led by prof. S. Juršėnas, prof. G. Tamulaitis, dr. R. Aleksiejūnas and dr. T. Malinauskas. They always participate in our conference, read invitational reports - review the achievements of world-class Lithuanian scientists in the fields of organic and inorganic (gallium nitride) optoelectronics. At this conference, doctoral student D. Banevičius shared his achievements in creating deep blue organic LEDs. Also the conference joined KTU researchers, specializing in renewable energy research. The winner of the scientific prize prof. dr. Š. Meškinis prepared the report.. It is very important that we also share technological platforms: one piece of equipment is stored at FTMC, another at VU, and a third at KTU, so we are happy to communicate and create future projects together.” - said the organizer of “APROPOS 17” dr. R. Butkutė.
Photos: Domas Jokubauskis 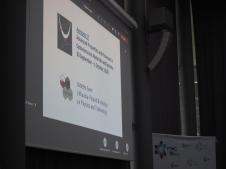 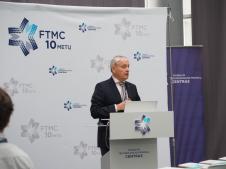 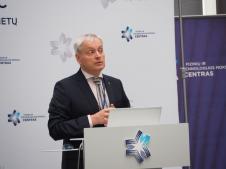 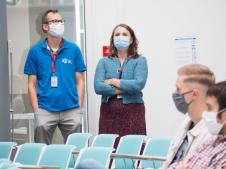 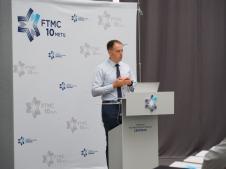 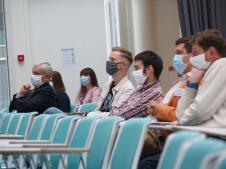 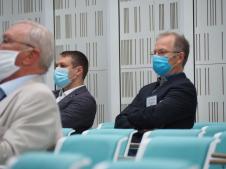 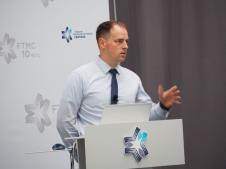 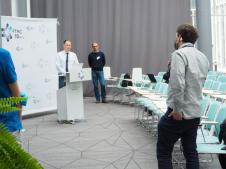 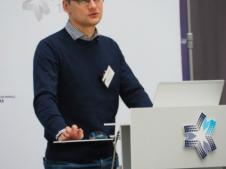 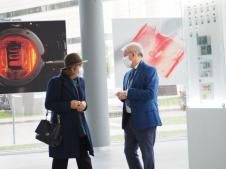 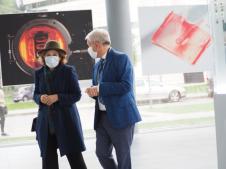 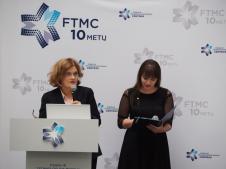 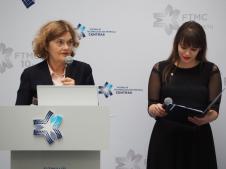