In May 2020, a prestigious science journal, “Langmuir”, published the unique scientific study of Center for Physical Sciences and Technology (FTMC) researcher Ph.D. Simona Strazdaitė: "Structure Determination of Hen Egg-White Lysozyme Aggregates Adsorbed to Lipid/Water and Air/Water Interfaces”. Also, the illustration of this scientific research, created by S. Strazdaitė, was published on the cover of the journal.
Ph.D. S. Strazdaitė is a scientist at the FTMC Department of Organic Chemistry, laboratory of Spectroelectrochemistry. Together with a group of scientists, she has investigated important molecular interactions between protein aggregates and a model cell membrane. The researchers found that protein aggregates get adsorbed to the membrane not only due to attraction between opposite charges, but also due to hydrophobic interaction, which potentially can be amplified if the membrane becomes disordered. 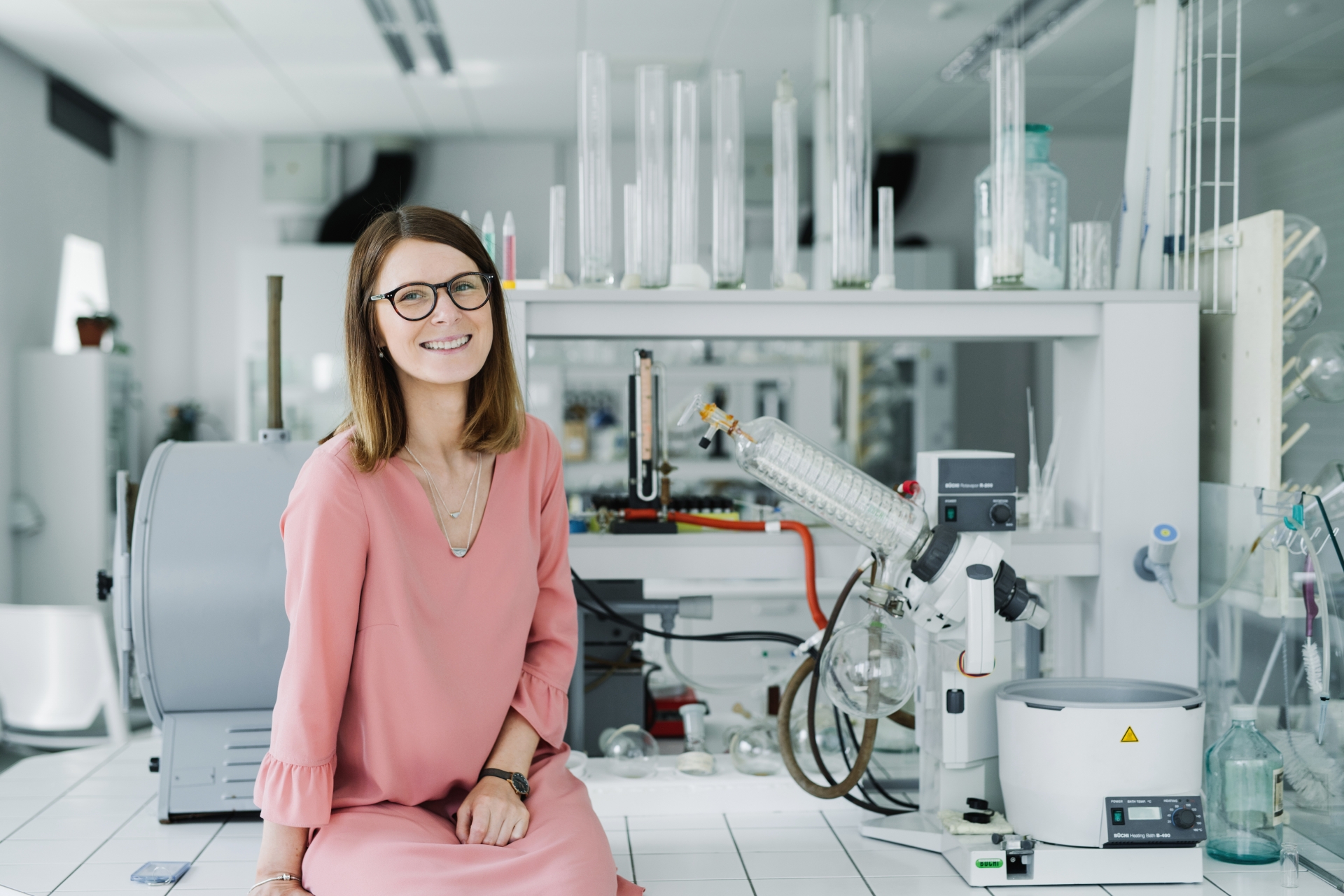 Dr. Simona Strazdaitė (photo: Lina Jushke for „Lamų slėnis")
These protein aggregation studies, which Ph.D. S. Strazdaitė is developing together with her colleagues, can contribute to the understanding of the development of complex and incurable Alzheimer's, Parkinson's, and other neurodegenerative diseases. FTMC scientist Ph.D. Simona Strazdaitė has explained more about the importance of this fundamental scientific discovery and the potential impact.

The main researchers of our scientific team are me, a senior researcher at FTMC, FTMC doctoral student E. Navakauskas, and prof. G. Niaura. We together are studying protein aggregation. This is a complex process in which proteins, like parts of a “Lego” constructor, combine to form larger structures. Generally speaking, the human body contains many different proteins that perform specific functions. When the conditions of protein’s environment change, proteins breakdown into smaller parts or their structure becomes altered, leading to their aggregation - fusion. During the aggregation process, proteins bind together and form various larger structures. These larger protein derivatives are potentially dangerous to our cells - they get deposited on the membrane of the cells, and due to this, the membrane starts to disintegrate. That is how incurable neurodegenerative diseases such as Alzheimer's and Parkinson's develop.
The theme of protein aggregation is very interesting and fascinating scientific field to me, it combines various different fields - physics, biochemistry and even a little bit of medicine. 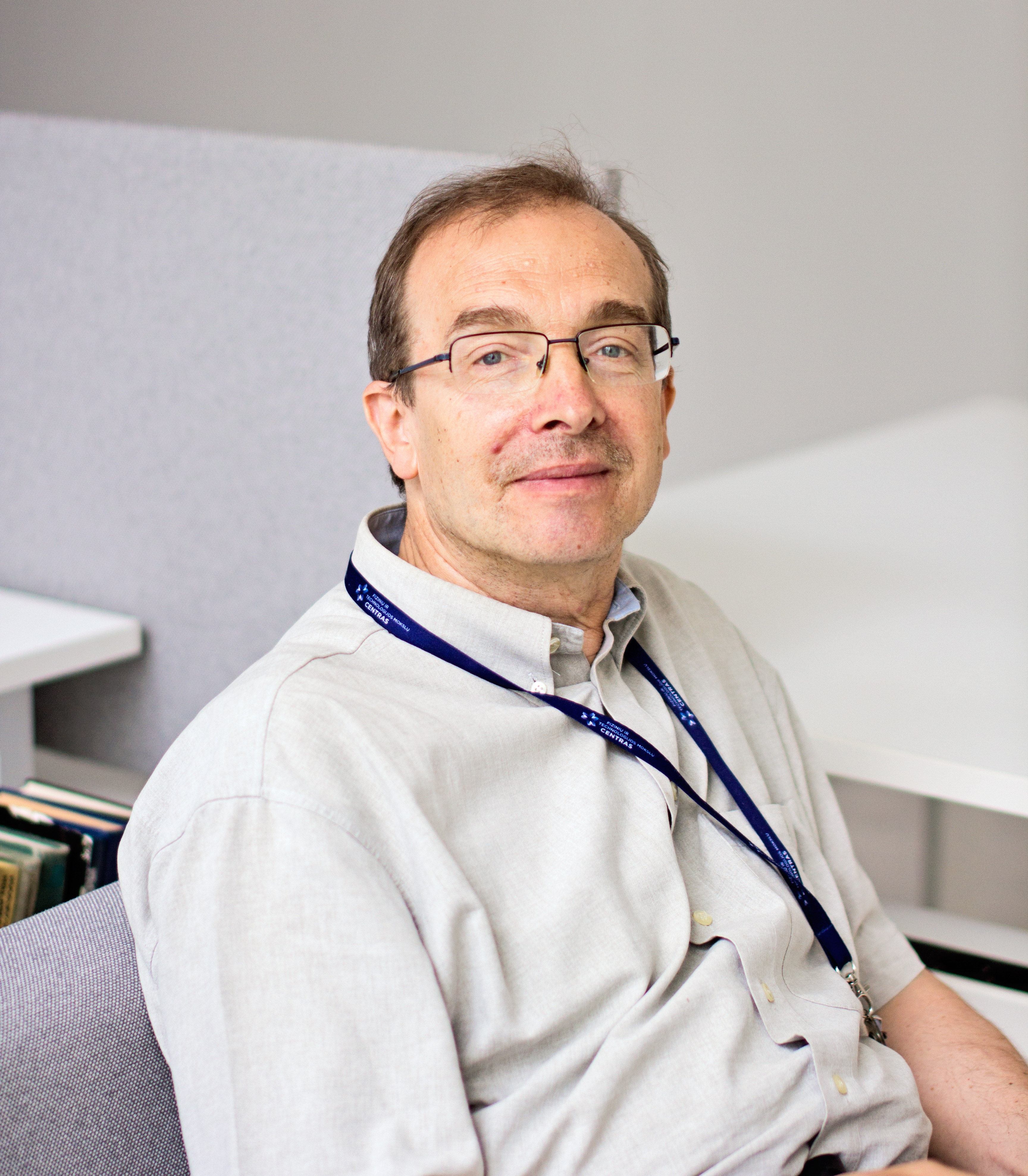 Prof. Gediminas Niaura (photo from personal archive)
In this work, which has just been published in the scientific journal “Langmuir”, we chose to investigate a protein called lysozyme. Although the aggregation of this protein does not cause any disease in humans, it is often used as a model protein for such scientific studies. Lysozyme is well studied and it is easy to control its aggregation, so it was a great candidate for the first study, performed by our team. We will also continue to research more complex proteins, such as a beta-amyloid peptide, which is considered to be a major cause of Alzheimer’s disease, as I mentioned earlier, its accumulation in the brain promotes cell loss processes.
Our scientific study is rather fundamental, but it also has very clear application benefits. We do not aim to figure out how to cure these diseases.  Although every scientific research is another step towards understanding, diagnosing and treating these diseases.

How long did the research take, which innovative methods were used?

This is an ongoing study, we have started approximately two years ago. In this work, we used a rather complex FTMC laser spectroscopy system, manufactured by the company “EKSPLA”. This system enables us to study and evaluate how various proteins aggregate at the water and other liquid surfaces. It was proposed that protein aggregation can be accelerated when proteins interact with the cell membrane. However, the majority of the scientific methods used for protein aggregation studies cannot investigate this interaction. The method that we are using is a surface-sensitive technique that allows us to study this interaction. In the laboratory, we create an imitation of a real cell membrane and observe how proteins accumulate and aggregate at it. Thanks to innovative technologies, we can see how the protein interacts with various surfaces, such as the model lipid monolayer, which is a highly simplified model of the cell membrane.

Could you, please, introduce all the scientific team members, who did help you to perform this scientific investigation?

This study was made by an international team: FTMC Ph.D. student Edvinas Navakauskas, prof. Gediminas Niaura, Ph.D. student J. Kirschner from the Technical University of Vienna and Ph.D. T. Šneideris from Vilnius University, Life Sciences Center. I have proposed the idea for ​​this research. Besides, I have performed the data analysis, interpretation, and preparation of the article. FTMC Ph.D. student E. Navakauskas completed the measurements. In scientific discussions, we participated altogether. There was also a need for help from other groups of scientists to perform different type of measurements. Ph.D. T. Šneideris helped us to visualize those protein aggregates with atomic force microscopy. An Austrian researcher, J. Kirschner, assisted in analyzing the data. It is important to say, that this project was funded by the European Commission. In 2018, I was granted an individual Marie-Skłodowska Curie scholarship for the implementation of this research.

What is the scientific significance of the article that was published in “Langmuir”? What relevant, new, unique results did you discover? 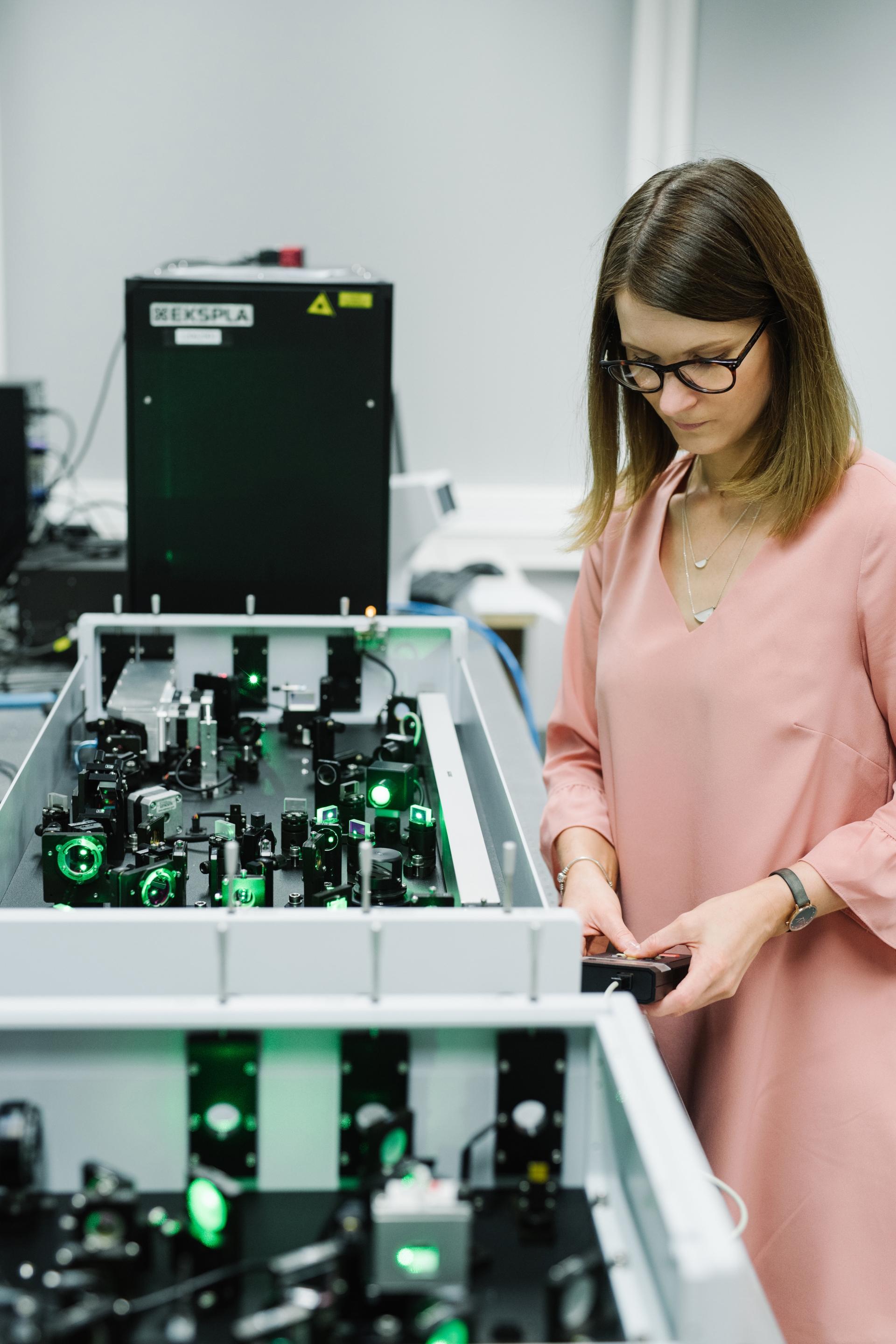 How can the results of this scientific study be useful in further international investigations on development, diagnosis, treatment processes of Alzheimer's, Parkinson's, and other neurodegenerative diseases?

As I mentioned earlier, in our scientific research, we have no intention “to find a cure” for Alzheimer’s or other diseases caused by protein aggregation. We, FTMC researchers, are conducting fundamental research that provides new knowledge and deep molecular understanding. We try to understand the intricate details of the protein aggregation and explain how it takes place at the molecular level. I believe that such fundamental scientific studies, including our work, are essential in finding an effective treatment for Parkinson’s, Alzheimer’s, and other diseases.
In our latest publication, published in the “Langmuir” journal, we discovered that even the smallest amount of protein aggregates adsorb to the membrane. This means that the disease caused by the protein aggregation needs to be tackled at the earliest possible stage of development.
Applied research is currently developing in this direction. Scientists in all the world are trying to develop and discover new methods that would help to diagnose the onset of protein aggregation in the human body as early as possible. In our research, we also discovered that membrane’s disorder determines the attraction of protein aggregates. With age, the composition of human cell’s membrane changes, which results in a less “tidy” membrane. It could be possible to slow the progression of such diseases by finding ways to keep the composition of human cell membranes unchanged.
The scientific methodology we applied in our research is complex, and it is used only by a few scientific groups to study protein aggregation. I hope that our team’s work will inspire more scientific groups to use this method for such research. Importantly, more than thirty different diseases are associated with protein aggregation, which is still not completely understood. Every piece of research is an essential step towards understanding, diagnosing, and treating those burdensome diseases.

“Langmuir” also published a cover with the illustration of your scientific research, which was created by you. What processes have you visualized?

I am a scientist and also an artistic person. Visual arts are the most appealing for me, so it was not difficult to create the illustration for the cover. In the illustration, I depicted a simplified membrane model on the water surface and protein aggregates attracted from the water. The rays symbolize the laser system we use to determine the structure of those protein aggregates.  For the background, I used a detailed structure of the aggregate itself, which was determined by the nuclear magnetic resonance (freely available in the database of protein structures). I am delighted that the journal’s editors accepted the cover I have created.

What does the fact that the illustration of your scientific study is published on the cover mean to you, the first author of the publication? How does the editorial board select illustrations for the journal’s cover?

Each issue of “Langmuir” has one primary and three additional covers, all of which are published online on the magazine's home page. I am very pleased that our study appeared on one of the covers of “Langmuir”. This scientific research was a big challenge for me. There were tough, critical moments when it seemed, that we do not understand anything, or we got lost in too much data.. The acceptance of the cover seemed to crown all of our hard work and it inspires us to continue working and finding out more important things.
This is a significant confirmation that, in the opinion of the editorial board of the journal, this scientific publication is relevant and will be interesting to a broad international scientific community. Our work advertised on the cover will receive more attention from scientists from various fields. This is very important for the scientific dialogue, for finding collaboration with other international scientific groups, which is necessary for the further development of a specific topic. The global scientific community publishes so many scientific articles, and scientists are not able to read them all. Usually, scientists read only articles relevant for their field. However, I think it is important to get acquainted with the works being done by researchers in other fields. I hope that there will be scientists, perhaps not even working with protein aggregation, who, after reading our publication, will think of ways how to contribute to the understanding of protein aggregation.

You studied abroad, returned to work in Lithuania, Center for physical sciences and technology (FTMC). What encouraged Your personal choice to become the scientist? Why did you choose this particular theme about protein aggregation? Together we calculated that this is your 12th scientific publication.

I don’t pay much attention to the number of publications. For me the most important thing is that the published work would really bring value and understanding to the chosen topic.
My personal way of becoming a scientist was inspired by altruistic intentions. I hoped that working as a scientist, I would be able to give the most I can give to people, to society. I am from Plungė, and when I was in school, I liked physics, chemistry, and later astronomy. I thought that if I have got such abilities to understand various complex physical and chemical processes, I have to use it for the best purposes. 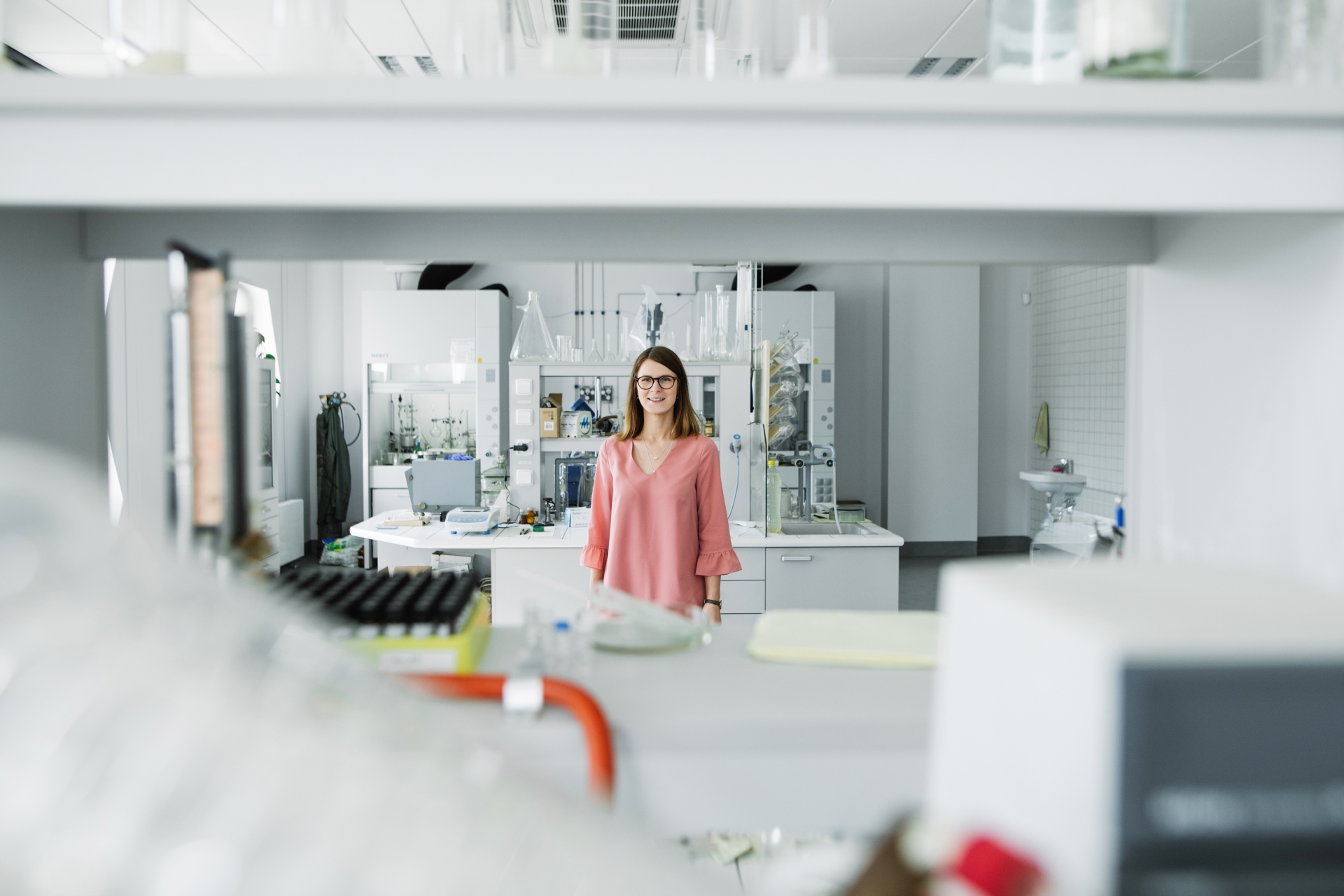 Dr. Simona Strazdaitė (photo: Lina Jushke for „Lamų slėnis")
The topic of protein aggregation came to me unwittingly. I spent a lot of time delving into various topics of spectroscopy. After finishing master studies at Vilnius University, I achieved my PhD at the Institute for Atomic and Molecular Physics (AMOLF) in Amsterdam. I worked in the field of nonlinear vibrational spectroscopy and began to study various proteins. I enjoyed researching proteins, it seemed complicated, but at the same time very interesting. So, when I returned to Lithuania and FTMC, prof. Gediminas Niaura proposed to work on protein aggregation topic, which I had heard about before, I was immediately drawn to start the research at FTMC. Our article published in the journal “Langmuir” is the result of continuous and difficult work, which we, together with the whole team, are really proud of.
The “Langmuir” cover created by PhD S. Strazdaitė:
https://pubs.acs.org/pb-assets/images/_journalCovers/langd5/langd5_v036i017-2.jpg?0.4030442452523024
The Article link:
https://pubs.acs.org/doi/abs/10.1021/acs.langmuir.9b03826
Langmuir is a journal of the American Chemical Society (ACS) group dedicated to fundamental research on various surfaces (Q2 quartile, citation rate 3,683 (2018)).